Arianagrace Nsereko, a current senior, is this week’s nominee for Marauder of the Week! Known to her friends and teachers as sincere, personable, and ambitious, Arianagrace, who likes to go by Grace, has only been at Belmont High School since October, yet she has already established herself as someone to be admired for her perseverance and hard work. When talking about her move over the summer from Kampala, the capital of Uganda, to Massachusetts, Grace touched on feeling out of place for the first few weeks of school and having to adapt to a differently-structured curriculum: “It was difficult at first, but now it’s definitely gotten better.” When the conversation turned to favorite subjects, she revealed just how much she loves math and how disappointed she was at not being able to take AP classes this year due to the timing of her arrival. She has dreams of becoming a nurse but has yet to figure out what exactly she wants to major in. Now, as the year comes to a close, she is expertly juggling the English thesis, history thesis, and multiple MCAS tests that are necessary for graduation, including the physics and chemistry MCAS exams. One thing that she wishes she had more time for on a weekly basis is clubs. She said: “Sometimes I have three essays due at once, and I have to do them before everything else.” She is confident that she will be able to participate more in extracurriculars while in college. The BHS community is extremely lucky to have such an assertive and inspiring senior in our midst. Congratulations, Grace! 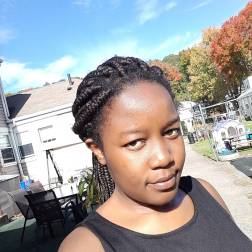 Stephanie Delva is a senior at Belmont High School. Her favorite subjects are psychology and anatomy, and she lists Ms. Bosch, Mr. Moresco, and Ms. Mastalong as teachers who had a significant influence on her life during high school. Additionally, she says that one of the most important moments for her as a student was when she received her first C, in freshman physics. Stephanie says that from that experience, she learned, “You’re going to get Cs – and sometimes you’re going to fail, in life, and you have to keep going.” She has played basketball at BHS and is a member of Black in Belmont, and she also tutors and mentors at her church. She mentions belonging to Black in Belmont as one of the parts of her high school experience that she’s proudest of, because “we’re able to help each other, and to create a community.” Stephanie wants to study medicine in college, an interest driven by her passion for helping others, especially those that can’t help themselves. To incoming BHS students, she says, “Don’t be afraid to be yourself, and to challenge yourself while you’re here.”

Principal's Picture of the Day

"Home of the Marauders"

Engaging in conversation around Education and Leadership

Empowering Leaders 300 Words at a Time

The latest news on WordPress.com and the WordPress community.